Are You Big Busted?

With the age of the super skinny model behind us and the greater acceptance of all body types as beautiful, the waif-like, flat-chested, ‘no-bra-needed’ look seems to have had its day and been surpassed by the ‘hell yeah, boobs are back’ age. Well, to be honest, it’s not that bigger boobs were ever really out of style, they were just made to feel less desirable than their smaller counterparts as more and more fashion designers chose flat-chested models to strut the catwalks of the world. If you grew up anywhere in the 80s or 90s you’ll know exactly what we mean.

Back in the 1990s when the Victoria’s Secret fashion shows first took off, the average bra size was a 34B. More than twenty years later, the average size is now a 34DD. Yes, the times they are a’changin’! Yet despite the reality check that some women have bigger boobs and booming demand from growing busts, there aren’t too many mainstream brands catering for boobs sized DD and above, and even fewer swimwear brands, which if any, tend to be dowdy and grandma-like in appearance. Not so with Artesands. Whether you’re a little or a lot curvy, bigger chested or not, or just want to enhance your shape, we care about making you feel and look amazing in your swimwear.

When we mentioned to some of our colleagues that we were writing this blog, their reaction surprised us. The consensus seemed to be that bigger boobs had never fallen out of favour. As one colleague said, “were big boobs ever NOT a thing?” Well, there was a time when it seemed the fashion world wanted us all to have small, perky breasts that held themselves up under strapless dresses and sheer blouses, nipples neatly staring straight ahead as we went about our business. Magazines, fashion shows and major retailers seemed to be calling out to the smaller cup-sized women among us and bigger-boobed women felt ignored and maybe even shunned.

Thankfully boob diversity has evolved in a way that speaks not only to those bustier women among us, but also to plus-size women. There is no longer a standard ‘average’ when it comes to cup sizes as there once was. There has also been a tremendous leap in acceptance of myriad body shapes and sizes. This is not to suggest we don’t still have a long way to go – we do, in many respects, but bigger bouncy boobs are back in a big way (don’t you love that alliteration ;). Women are now proudly displaying their bigger busts in lingerie and sexy swimsuits made for all sizes. If you’re someone who has always been proud of their bigger boobs, then you’re now part of a revolution of acceptance. Maybe you even helped pave the way by owning your body and boobs with genuine enthusiasm.

But not everyone has made peace with the size of their boobs. If you had to survey a group of women, I’m certain at least half would say they’d prefer bigger/smaller boobs and perhaps a percentage of those would even go so far as to say they would love to get a breast reduction or enhancement. I suspect, most of those feelings of discontent would have to do with feeling unable to wear the fashion of their choice because of their boobs.

Even more so, when it comes to swimwear. As we head into the warmer months, instead of looking forward to gorgeous sunny days at the beach or a pool, many women will be feeling anxious about getting back into swimwear. Summers gone by may have left us feeling less than sexy in our swimsuits and all we want it to feel good, to feel confident. Yes, there are those among us who have the gift of not caring what anyone thinks and simply wearing whatever feels most comfortable, but I would hesitate to guess that most of us would have some kind of anxiety about bearing our bods in beach attire.

I guess the saving grace of much of the anxiety around swimwear and our bodies, is that some swimwear brands are finally waking up to the reality that bigger boobs are a huge part of the market and they need to be catered to. We, on the other hand, have literally built our brand around ‘the curvy’ – all curves – and have made sure that what we offer is specifically designed for maximum comfort and support. There is no point designing swimwear that looks great, but is a punish to wear and a high-risk option to actually swim in. Ideally, we want style, comfort, support and durability all in one package. 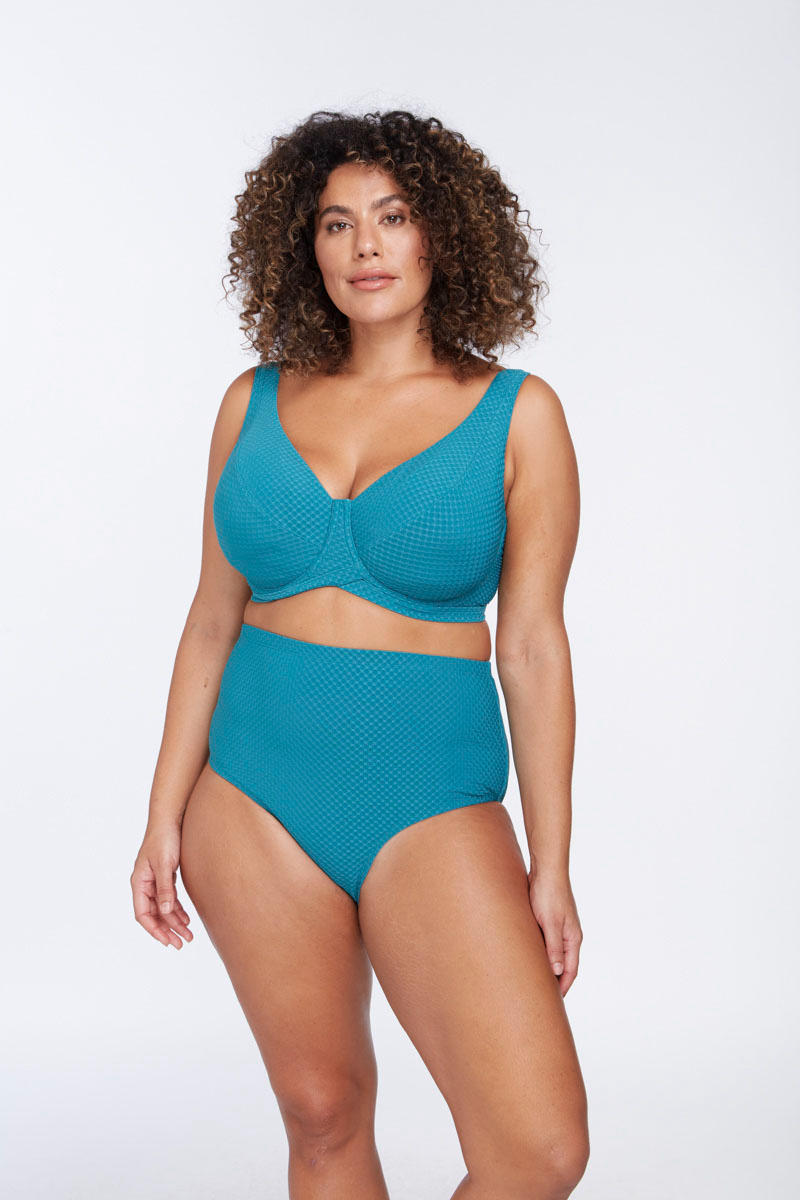 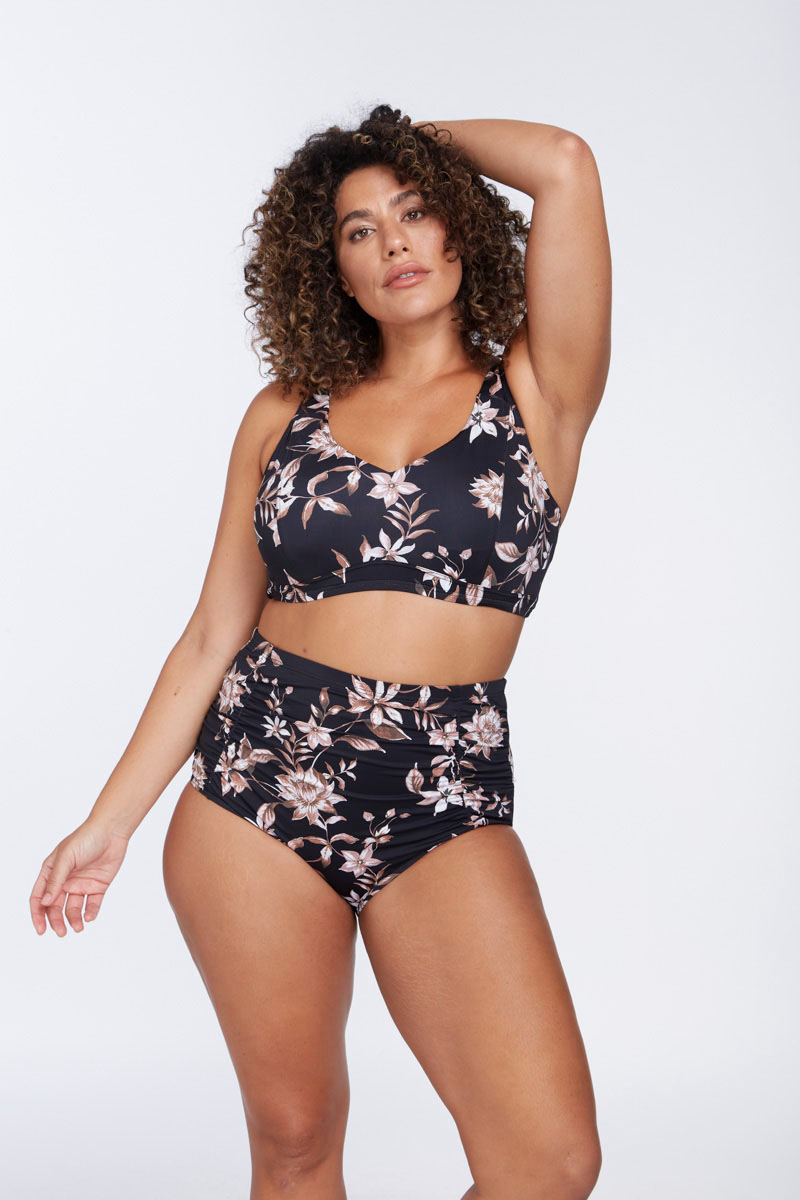 There are a few things to keep in mind when looking for swimwear to fit a fuller bust.

Firstly, and this might sound obvious, but make sure the swimwear actually fits you and fits you well. This is the biggest complaint by women with bigger boobs when it comes to swimwear. Make sure your girls feel supported and secure – like nothing’s going to pop out if you decide to dive into the ocean. Anyone who’s actually had that experience will know what we’re talking about #mortifying.

Find a style or silhouette that suits your body best. That may be a one piece, a bikini or a tankini. This usually means trying on a few different styles to work out what fits and feels right on your shape. It doesn’t mean you have to cover your boobs and hide them away – let them shine, just in a slightly contained way.

Don’t make the mistake of choosing fashion over fit. If the latest trend is flimsy, strappy barely-there bikinis and that doesn’t work for you, don’t be sad – there are so many gorgeous and supportive styles and fabrics to choose from that are specifically made for bigger boobs.

Mostly, we just want to say that if you have bigger breasts, love them, look after them and don’t let them hold you back – because big boobs are beautiful.

Here are some of our favourite new styles perfectly suited to bigger boobs.

Big busted, we have you covered! 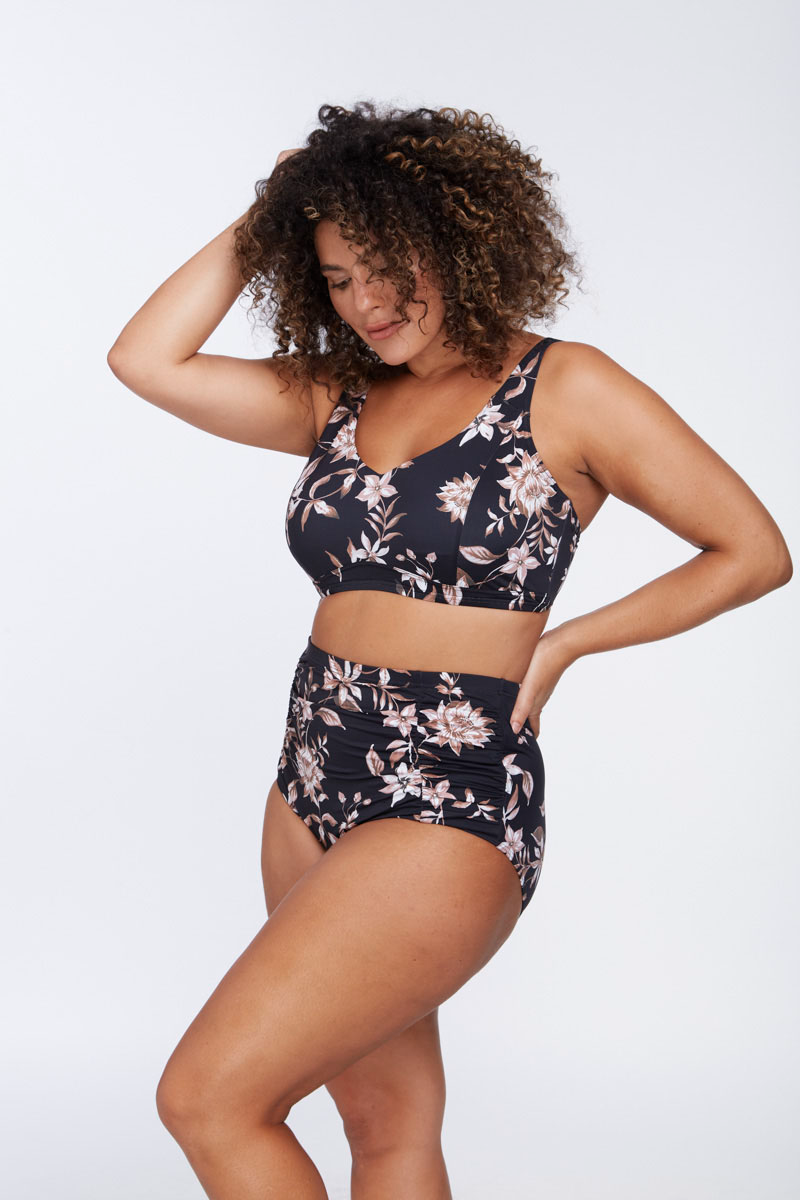 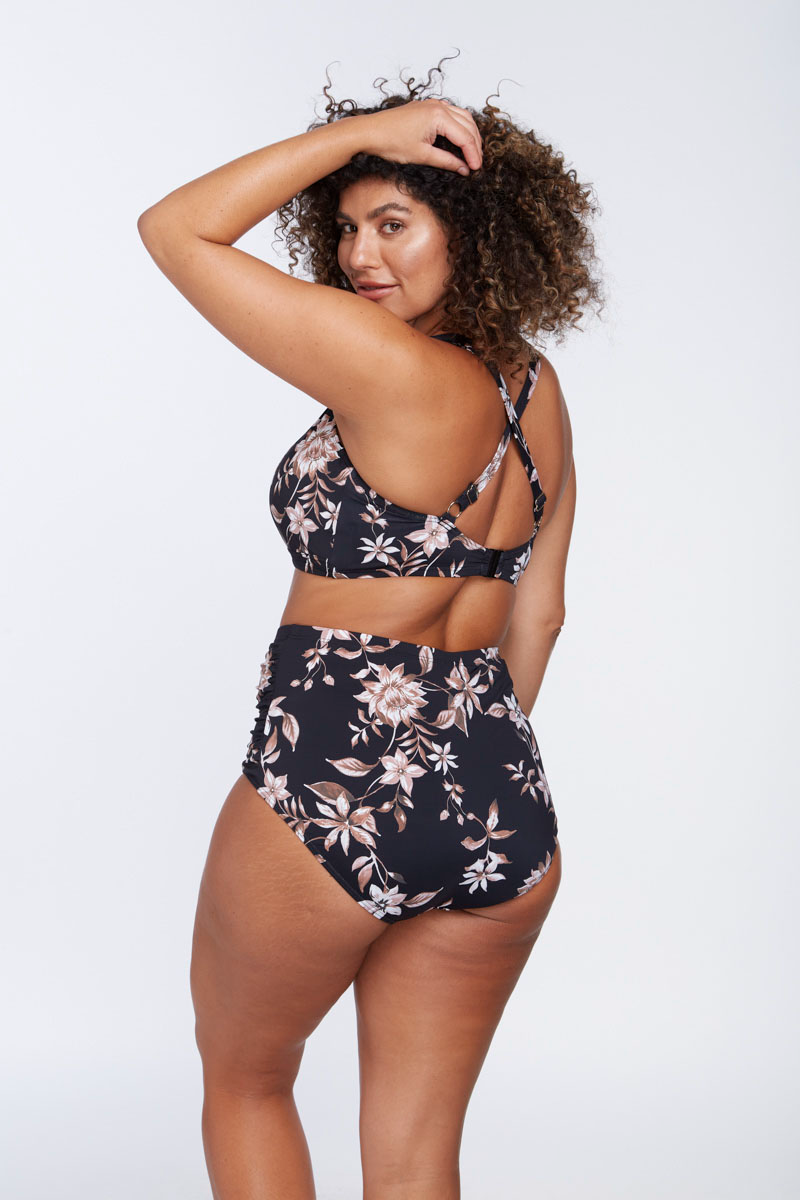 Stay in style in our Goya Bikini Top

Our latest style Goya is a bikini top suited to fit an E Cup / F Cup, Goya is available in our textured fabrication Rhapsody

Our Goya underwire bikini top is designed to fit and support an E cup to F cup.

The strap clip is located on your back shoulder blade and allows you to cross over the straps. The benefit to this technology is so you don't get any neck or shoulder pain and the straps won't ping off from pressure over time. You can tailor your own fit by using the new "Strap Clip" technology, to unclip and cross the straps for extra support

All of our wide straps are supported with strong rings and sliders to avoid any breaking or rubbing, the wide straps sit flush on the shoulder without the discomfort of digging in. This curve fit swimsuit also have the added adjustability of our strap clip technology.

Self fabricated hook and eye

This bikini top has a three clasp back hook and eye that is bonded with self fabric to give the curve fit swimsuit extra support and adjustability. 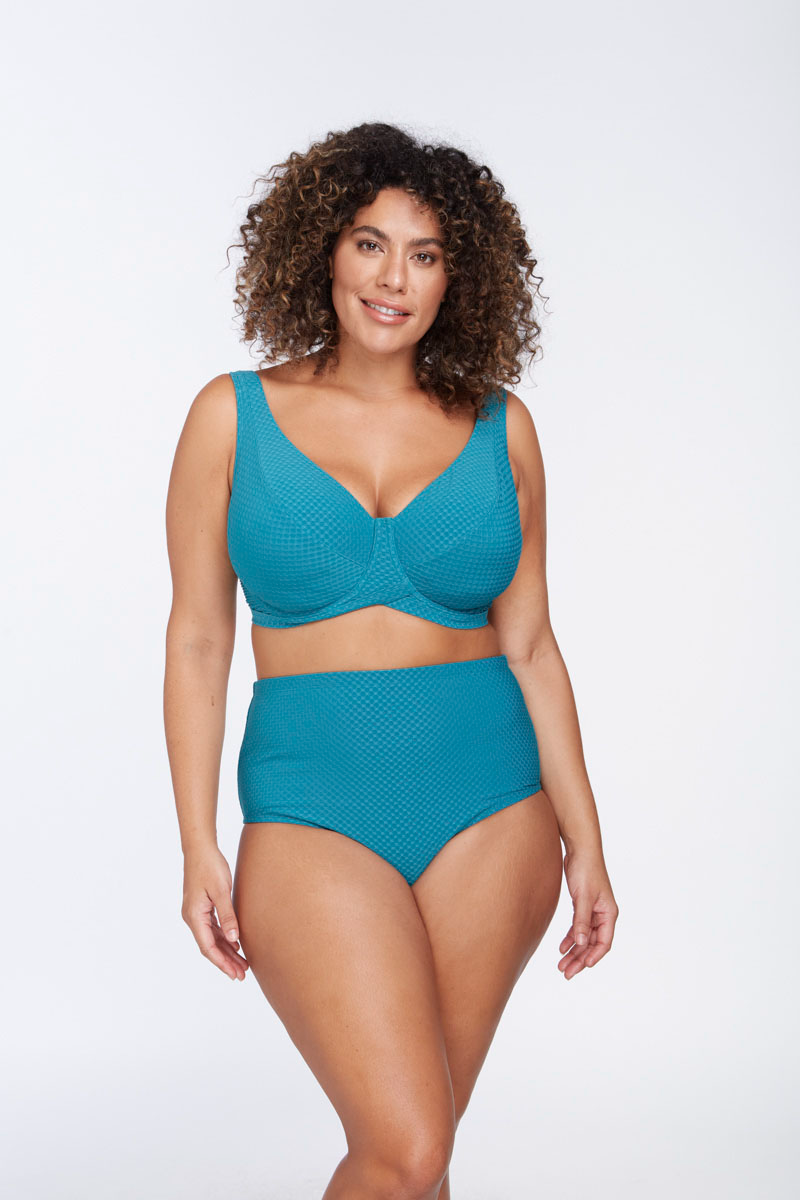 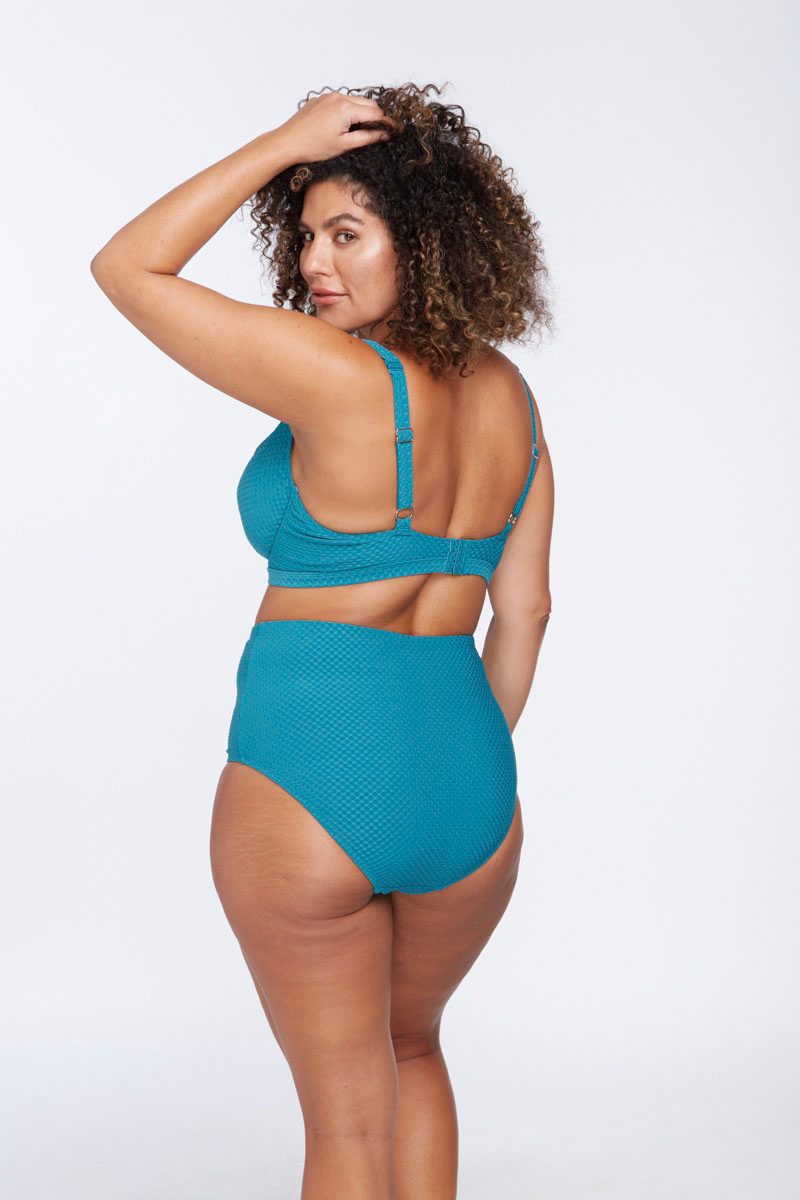 Raphael – All the bells and whistles

Our Raphael silhouette is available in a bikini top, tankini top and one piece

Artesands Fits Your Curves. Raphael is our full support style with all the bells and whistles. This curve fit and plus size swimsuit has underwire support to fit a E cup to F cup, and full body 360 degree powermesh for body sculpting confidence.

Our Raphael underwire swimsuit shape is designed to fit and support an E cup to F cup.

This curve fit swimsuit has underwires for bust support designed to fit the curvy body shape.

Our curve fit and plus size swimsuit has soft removable cups.

Our Raphael swimsuit is our most modest coverage style. This shape has a front v neck with good bust coverage.

The strap clip is located on your back shoulder blade and allows you to cross over the straps. The benefit to this technology is so you don't get any neck or shoulder pain and the straps won't ping off from pressure over time. You can tailor your own fit by using the new "Strap Clip" technology, to unclip and cross the straps for extra support

All of our wide straps are supported with strong rings and sliders to avoid any breaking or rubbing, the wide straps sit flush on the shoulder without the discomfort of digging in. This curve fit swimsuit also have the added adjustability of our strap clip technology.

This curve fit and plus size swimsuit has soft removable pads. These can be removed and a mascetomy prosthesis can be put in its place.

Our curve fit bikini top has a solid plastic back clip. This secures the bikini top on the bust and gives extra support.

A bikini or tankini top is the perfect option for full coverage when you need a different size top and bottom. You can make the perfect bikini set or tankini set 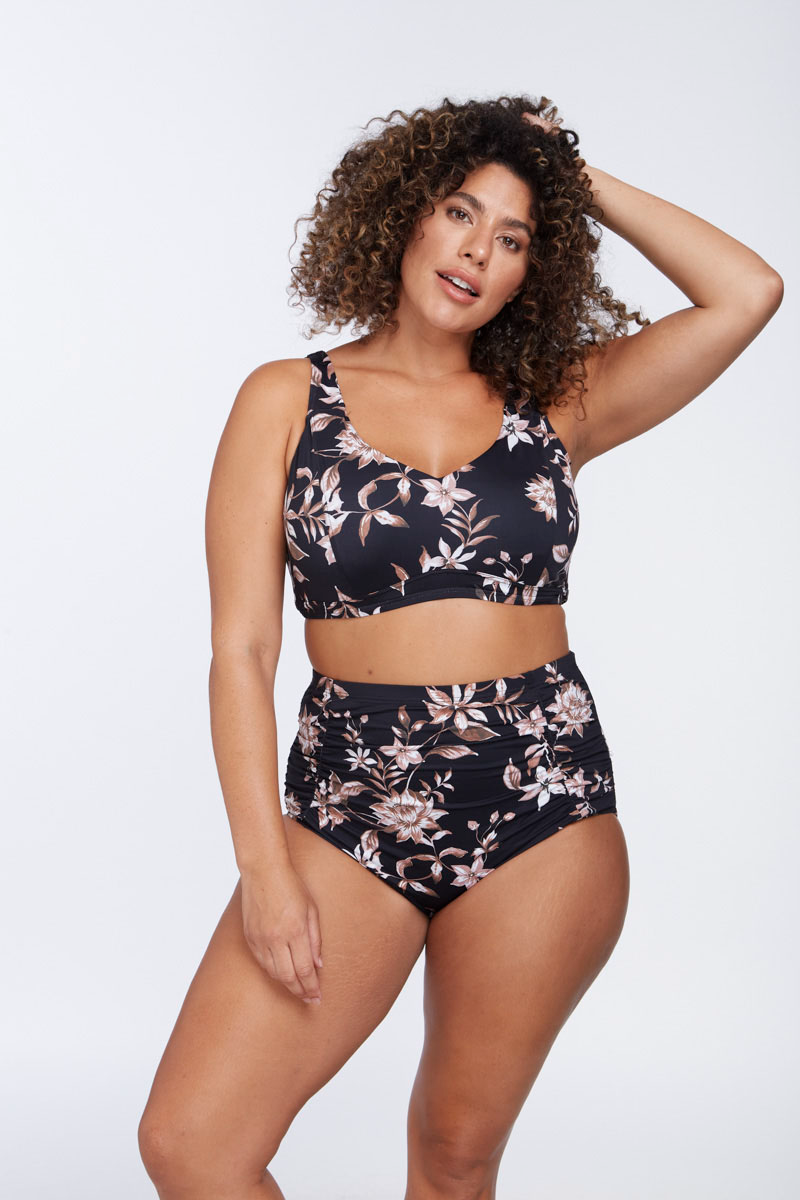 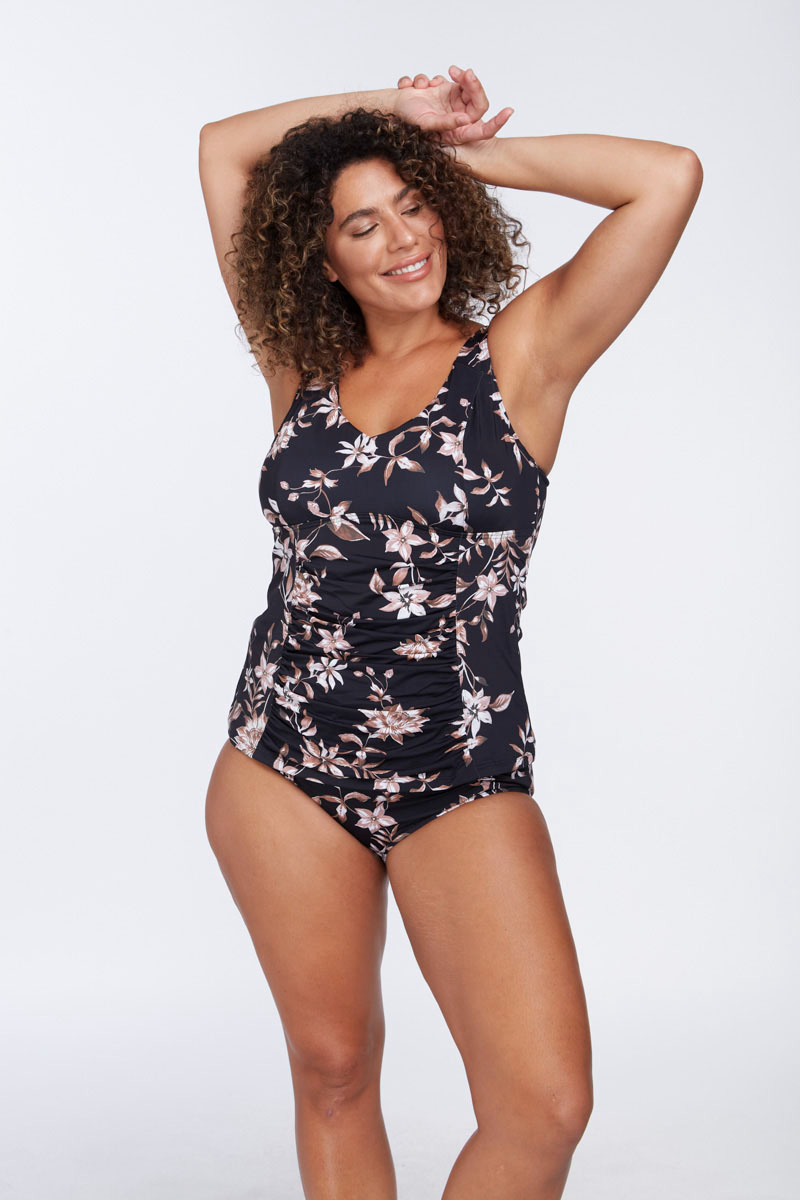 We are trying to make finding your Artesands size as easy and simple as possible for you! Have you seen our guide on how to measure your body blog?

The blog above goes into great detail on the areas you should measure and what to do if the measurements aren’t the same size for you top and bottom, this is very common so we have tried to make it simple for you to still have a matching set of your swimwear costume so you can have the latest prints matching on the beach.

If you already own an Artesands curve fit plus size swimsuit you will notice all of our sizes on the garment tag have a little + symbol. This plus symbol symbolises ‘plus a little bit more’. As we design all of our swimwear on an Australian size 18 model this means we have allocated for more fabric and fitting to be allocated across the body, we know as well as anyone that when you go up a size its in all different areas of the body. Read our blog here to find out more.

If you are unsure about your Artesands size, we have a step by step blog on how to measure your body to find your perfectly fitting curvy swimsuit.

To find swimwear in your size click the size link:

You can also select your perfectly fitted curve fit and plus size swimsuit by cup size, click the link to find all plus size swimsuits available for your cup size;  A cup / B cup, C cup, D cup, DD cup, E cup, F cup, FF cup and G cup.

FREE shipping on orders over $150 AUD

We acknowledge the Gadigal people of the Eora Nation as the Traditional Custodians of the Country we live in. We recognise their continuing connection to the land and waters, and thank them for protecting this coastline and its ecosystems since time immemorial. We pay our respects to Elders past, present and emerging.

20% off your first order. Sign up to our newsletter